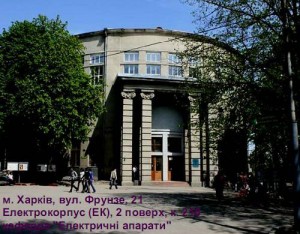 substations, etc.), transformation of voltages, currents and non-electric quantities of various technical objects to electrical ones (various sensors, relays). As technical objects they represent devices characterizing by complicated functions as well as by necessity of their realization at small and high currents (from unities of mA to hundreds of kA), over-voltages (1–100 kV), instantaneous temperatures in the zones of contacts (to 3000 оС) and relatively small actuation time intervals (unities of ms).

At different time, directions and areas of these problems are solved by experts of the school created at the Department for Electrical Apparatuses. 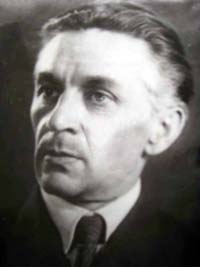 The founder of the Ukrainian scientific school “Theory and practice of electrical apparatuses” is Boris Fedorovich Vashura (1889-1969). Scientific outcomes of this school connected with development of the theory of apparatuses for automatic control and adjustment of electric motors. These results are reflected in works of many learners and created him immense prestige in our country and abroad. During this period the department prepared 319 engineers on electrical apparatuses, the monograph “Electrical arc in control apparatuses” by O.B. Bron was published (1954). 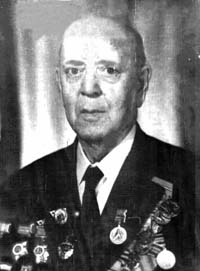 Regarding teaching activity, it is necessary to emphasize the development by B.F. Vashura and his skilful lecturing of new for this time lecture courses such as “Apparatuses of automatic control and adjustment” and “Electric machines control”. Manuals prepared under his guidance were a base of many textbooks in the area of Electromechanics.

From 1957 to 1959 Prof. Dr. Tech. Sci. V.K. Ponomarenko headed the Department. The Department investigated and developed electronic devices for mine and torpedo weapons.

From 1959 to 1961 Prof. V.G. Vasiljev headed the Department. During this period a scientific area has been established – mathematical modeling of the

processes in nonlinear electromechanical systems. The goal of this investigation is consisted of development of a general theory of nonlinear control systems permitting the synthesis of nonlinear control systems like the theory of linear systems did it. By its complication this problem can be compared with the problem of the common field theory creation. Under V.G. Vasiljev’s guidance a series of investigations in the area of the theory of automatic control in the field of electrical apparatuses was carried out. The experimental laboratory for electronic modeling was established, and the first at the KhPI analog computer was created. It permitted to carry our first investigations in the field of analog modeling of processes in complicated nonlinear control systems. Using obtained results the control system of the excavator ЭВТ-35 for the Kharkov Electromechanical Plant was optimized. There were contracts between the Department for Electrical Apparatuses and another Kharkov and Ukrainian plants. Results of investigations were presented in the monograph “Calculation and design of AC and DC electromagnets” by M.A. Lubchik (1959). 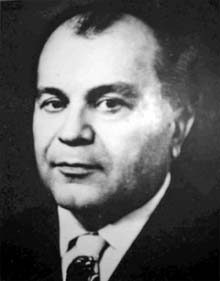 There are special words about famous scientist Prof. Dr. Tech. Sci. Viktor Trofimovich Omelchenko headed the Department from 1961 to 1978. At his participation the theory of the processes on contacts has been improved. He is the author of a new principle – self-improvement of the electrical apparatus, in particular its contacts. In 1979 he has developed a theory of heat-and-mass transfer in electrical contacts made from different metals. Here, the contacts “improve themselves” because the contact material transfer direction is adjusted by contacts “independently” depending on the alloy composition which created in the points of microscopic contacts break. Results of investigations in this area are published in 100 publications including 3 monographs.

Since 1968 the Department collaborated with the Institute of Electric Power Energy, Poznan Politechnica, Poland. When Prof. V.T. Omelchenko headed the Department, 27 PhD theses were prepared and defended.

Further development the practice of electrical apparatuses had during the period from 1978 to 1995 when Cand. Tech. Sci. Vladimir Nikolaevich Ivanov headed the Department and the scientific school. A few investigations in various areas are carried out. A high-speed circuit breaker for voltage of 4000 V and current of 3000 A for traction substations of electrified railways was created. V.N. Ivanov developed a theory of contact apparatuses for control circuits. He is the author of 50 publications including 2 monographs.  At the Department a new research area was founded – investigation and development of devices for local magnetotherapy on the base of electromagnetic systems with constant magnets. The main research significance of these investigations is development of the theory of electromagnetic systems with constant magnets which shape and magnetic properties are used for contactless influence at biological active points in the human body. Results of investigations are implemented at a few hospitals.

From 1995 to 2004 Prof. Dr. Tech. Sci. Boris Vladimirovich Klimenko headed the Department. He worked in the areas of electromagnets operation forced modes, thermal processes in their windings, and development of devices for local magnetotherapy. Under his guidance a series of investigations regarding switching devices are conducted by E.I. Bajda, O.G. Sereda, A.A. Chepeliuk which defended their PhD theses in 1999, 2001 and 2006, respectively. Prof. Klimenko published 3 monographs, about 180 scientific publications and about 100 patents. At the Department modernization of laboratories is carried out, two exposition halls to conduct interviews with University entrants, lectures for students, international Conferences and presentations, Dr. Sci. and Cand. Sci. theses presentations are established. The new graduating speciality – Electrical Domestic Engineering – was established. Among experts the monographs “Forced electromagnetic systems” by B.V. Klimenko is well-known. By his initiative the scientific Journal “Electrical Engineering and Electromechanics” is created and published at the Department, since 1999 the International Symposium “Problems of Improvement of Electrical Machines and Apparatuses. Theory and Practice” (SIEMA) is held. Prof. Klimenko prepared 5 Cand. Tech. Sci. and 1 Dr. Tech. Sci.

Since 1999 at the Department a new scientific area is created – investigation of electrical apparatuses aimed to decrease their magnetic fields to solve problems of electromagnetic compatibility and ecological security. Investigations have been conducted in the frame of the KhPI budget works under Prof. Klimenko’s guidance. The principal investigator – Cand. 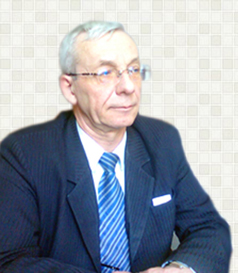 Tech. Sci. Doz. V.S. Lupikov, investigators N.V. Krukova, O.A. Geliarovska, E.G. Korol, I.S. Varshamova. On the base of obtained results V.S. Lupikov defended his Dr. Tech. Sci. thesis in 2004. From 2004 to 2012 Prof. Dr. Tech. Sci. Valerij Sergeevich Lupikov headed the Department. He started his work at the NTU “KhPI” in 1998 as Dozent and later – as Head of Department. He was a coordinator of the International Symposium “Problems of Improvement of Electrical Machines and Apparatuses. Theory and Practice” (SIEMA). His main research area was creation of scientific basics of a technique for compensation of external magnetic field of low-voltage distribution devices, which utilization guarantees realization of acting and prospective requirements regarding electromagnetic compatibility. At his participation firstly in Ukraine 3 State Standards on electromagnetic compatibility were created, a method for synthesis of compensation devices for magnetic fields of electrical equipment is developed, investigations of physics of processes in electrical apparatuses are conducted. He published 180 scientific publications including 47 patents. Under his guidance the thematic scientific Proceedings of the NTU “KhPI” “Problems of improvement of electrical machines and apparatuses” was established. 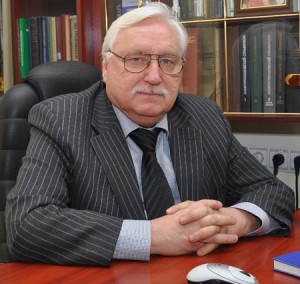 Currently, Prof. Dr. Tech. Sci. Boris Vladimirovich Klimenko headed the Department. He is working at the Department for Electrical Apparatuses more than 30 years. His successful activity is promoted to increase the authority of the Department which is well-known not only within NTU “KhPI” but and in the former USSR, Eastern and Western Europe, and in America. B.V. Klimenko has incontestable authority among experts in the field of Electrical Engineering because of his investigations of electrical apparatuses, their thermal and magnetic fields, as well as electrodynamic processes. He guides scientific developments of the Department, takes direct part in the inplementation of engineering developments to the manufacture processes of modern electrical apparatuses. His talent and intellectual curiosity Boris Vladimirovich transfers to students, Masters, PhD students and Cand. Sci. Currently he is an active participant of the European education harmonization in the form of the “Bologna Process”. At his participation two monographs devoted to problems of this process are published: “Bologna Process: cycles, grades, credits” and “Bologna Process and lifelong learning”. He is an initiator of new forms of educational process namely “blind synopsis” – a printed text of the lectures with margins for notes and questions during the lecture, utilization of the multimedia projector to demonstrate illustrative material, modular grouping of lectures. Under lecturers’ guidance the Internet search for preparation of Bachelor and Diploma projects is organized, the Department’s education methods are renovated.