WHAT IS Eastern Partnership?

The Eastern Partnership (EaP) is a joint policy initiative which aims to deepen and strengthen relations between the European Union (EU), its Member States and its six Eastern neighbours: Armenia, Azerbaijan, Belarus, Georgia, Moldova and Ukraine.

In this framework, guiding the EU’s relations with its neighbours is the EU’s Global Strategy and the revised European Neighbourhood Policy which call on the need to focus on increasing the stabilisation and resilience of the EU’s Eastern neighbours.

Within this framework, there is a joint commitment to deliver tangible results for citizens across the region. In support of a more results-oriented approach towards the Eastern Partnership, the European Commission and European External Action Service identified 20 key deliverables for 2020, with milestones identified during the last EaP Summit, which took place in Brussels in November 2017.

These commitments by the EU, its Member States and the six Partner countries cover the four main priority areas of the Eastern Partnership:

A structured engagement with a wider range of civil society organisations, furthers gender equality and non-discrimination, as well as clearer and tailor-made strategic communications are also being pursued as across all areas.

In a wider context, the EaP also supports delivery on key global policy goals set by the UN 2030 Sustainable Development Goals and the Paris Agreement on Climate Change. 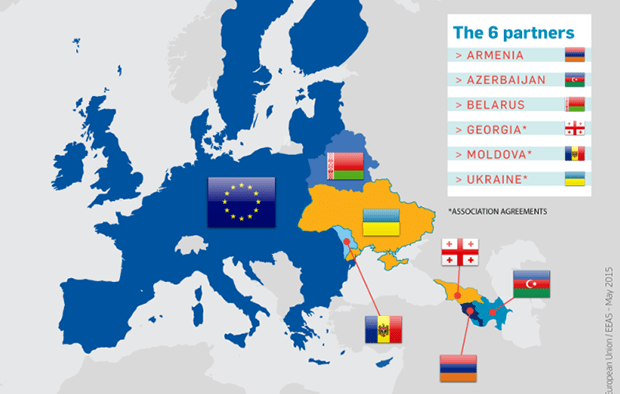 HOW DOES IT WORK?

Supporting the comprehensive approach by the EU towards its Eastern partners is the European Neighbourhood Instrument, which is the key EU financial instrument for cooperation with the EaP countries during the period of 2014-2020.

Cooperation then takes place both at bilateral (with individual partners: Armenia, Azerbaijan, Belarus, Georgia, Moldova and Ukraine) and at regional level, depending on the nature of the action.

This is then supported through the relevant dialogues, both at bilateral level, such as the Association Council, as well as at multilateral level through thematic Platforms and Panels of the Eastern Partnership.

Eastern neighbours also participate in initiatives open to all Neighbourhood countries – such as Erasmus+, TAIEX, Twining, SIGMA and the Neighbourhood Investment Facility – and in Cross-Border Cooperation programmes.

After 10 years of close cooperation, the joint work of all partners is not finished.  A broad and inclusive structured consultation process to reflect on the future strategic direction of the Eastern Partnership and a new – post 2020 – generation of deliverables is now open.
Please visit the official consultation page.