The scientific direction of Professor D.V. Breslavsky group is nonlinear mechanics of a deformable solid body, in particular – creep and long-term strength of materials and structural elements at temperatures and loadings, which statically and cyclically change. The group works in close contact with the scientific direction of Professor O.K. Morachkovsky, head of the department of theoretical mechanics of engineering and physics faculty.

For the last decade scientific researches were conducted by D. V. Breslavsky’s masters and postgraduate students, many of whom after defending his doctoral dissertation, continue work at Department of Control Systems and Processes.

Researches in the scientific direction, created by D.V. Breslavsky together with O.K. Morachkovsky, in the field of cyclic creep of materials and structures continue.

In the doctoral dissertation of O.A. Tatarinova “Development of the calculation method of durability estimation of cyclically loaded not axisymmetric thin-walled structural elements», the new state equations of high-temperature creep and fracture of materials under combined action of static and cyclic loadings are offered. There are considered cases of combined action of rather slowly changing loadings corresponding to cycles of functioning engines of space-rocket hardware – engaging, entering the mode, forcing and switching off, and fast, associated with vibration. The calculation method, algorithms and software for calculation of creep and damage of thin-walled shell structures are created on the basis of finite element method (FEM). Problems of creep of gas-turbine combustion chambers and liquid jet engines are solved.

Yu.N. Korytko in the doctoral dissertation “Development of the calculation method of structural elements durability at periodic change of temperatures and stress” used asymptotic methods and averaging on the period of temperature cycles for receiving state equations reflecting influence of cyclic heating and cooling on creep and long-term strength of materials. On the basis of FEM the method of calculation of structural elements is developed in the work, which calculation schemes according to two-dimensional problems of the creep theory. There are solved practical problems of creep and fracture of heat exchangers tubes, GTE blades, long-term strength of an active zone shield of the nuclear reactor Water-moderated Water-cooled Power Reactor-1000 at radiation creep of its material. Last time the methods created by D.V. Breslavsky and Yu.N. Korytko and calculation programs are developing by postgraduate student of the Department V.O. Mietielov.

The second direction of the D.V. Breslavsky’s research group is long-term strength of structural elements at dynamic and impact loading. In the researches performed by N.V. Shiryaeva in the doctoral dissertation “Development of the calculation methods of nonlinear oscillations and durability of vanes and blades of steam and wind turbines” influence of oscillations of GTE blades with big amplitudes (nonlinear oscillations) on their long multi-cycle fatigue is established.

A.V. Onishchenko and I.V. Naumov studied problems of dynamic strength of plates at impact loading. A.V. Onishchenko received the equations describing the motion of the rectangular plate made of orthotropic material at its impact loading by a solid body with use of the method offered in the works of V. Goldsmit and A.P. Filippov. The numerical-analytical method for solution the problem is used, and the boundary problem is solved analytically, and initial – numerically. The received distribution of the stress-strain state is used for a damage level assessment in plate layers at repeated impact.

I.V. Naumov in the doctoral dissertation ” Experimental and numerical studies of dynamic processes in constructive elements of the equipment at impact and punching” solved an important practical problem of estimation impact strength of computer storage medium – stores on hard magnetic drives (HDD). There is considered the device for prevention of unauthorized access to information which is written down on hard drives destroying them by means of one or several mechanical impacts. The experimental complex for research of behavior of thin-walled structures at impact loading is modelled and manufactured, the cycle of experiments on impact deformation of steel and aluminum plates is carried out. Created the calculation-experimental method allowing to define necessary quantity of impacts for destruction of computer disks and assembled HDD.

Specialization of the Department has largely determined the subject of scientific research group, carried out on scientific topics of budget financing. In 2007-2009 D.V. Breslavsky and O.A. Tatarinova made research of combined influence of space radiation in an external electronic belt of Earth and the thermal field which is periodically changing as a result of rotation of the satellite on the long-term strength of elements of devices.

In 2010-2012 within works on the scientific topic “Development of the methods providing resource of structural elements and control systems of space aircrafts” the state equations created earlier in works of D.V. Breslavsky, O.K. Morachkovsky, O.A. Tatarinova and Yu.N. Korytko describing creep at cyclic change of temperatures and stress were adapted for use in calculations of responsible constructive elements of aircraft. Strength calculations of aircraft bodies are made. Using computational methods developed by D.V. Breslavsky, A.V. Onishchenko and I.V. Naumov there are performed estimate of dynamics and destruction of aircraft panels at impact loadings. D.V. Breslavsky, K.Yu. Schastlivets and S.O. Pashchenko researched the non-stationary thermal modes of the devices created on the basis of fiber-optical gyroscopes and installed on space aircraft.

The third direction of group is development of software for calculations performed using the finite-element method (FEM). Employees of the group developed three research program complexes realizing this method. There are:

In addition, developed programs for solution problems of own and forced oscillations for not axisymmetric shells in two-dimensional. Preprocessor and post-processor programs are developed for each complex. Senior students of the specialties “Applied Mathematics” and “Informatics” took part in their creation. P.N. Lysak (I-23A) and E.V. Zolotko (I-24B) during work on baccalaureate and degree projects under the supervision of Professor D.V. Breslavsky developed computer programs – preprocessors of finite-element calculations. The program developed by P. Lysak on Java language allows to generate two-dimensional finite-elements grids of difficult geometry figures for carrying out the subsequent researches of their strength.

The certificate on copyright is received on the program developed in co-authorship with P.N. Lysak. 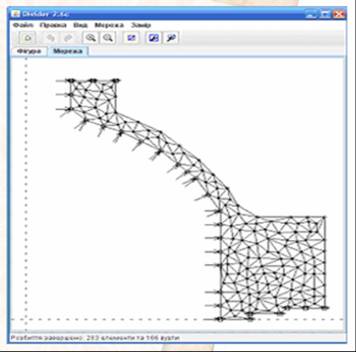 Program of E.V. Zolotko represents the user interface of the software for modeling creep and long-term strength of thin-walled structural elements of the space aircraft including subsystems of input data, generation finite-element grid and visualization of calculation results. 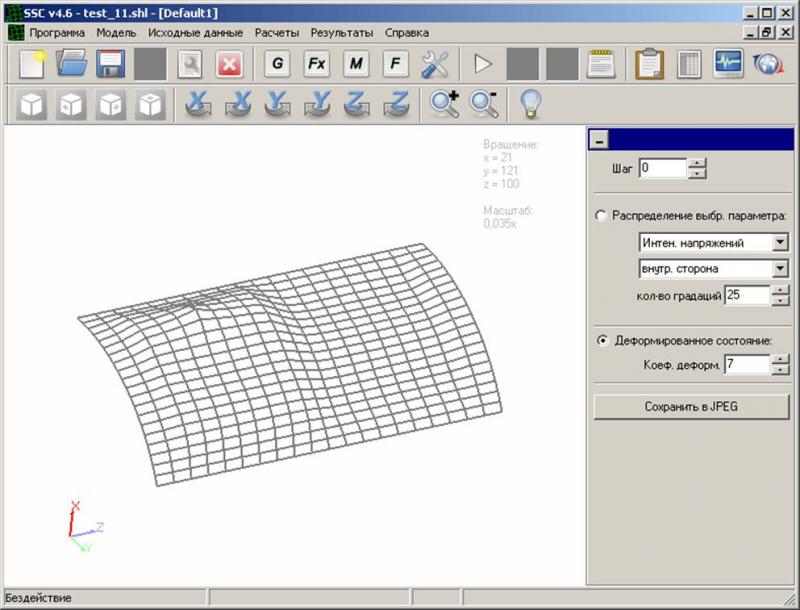 Generation of finite-element grid in SCC 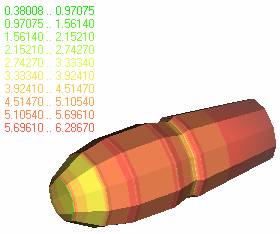 Visualization of calculations in SCC

Finite-element partition of the body 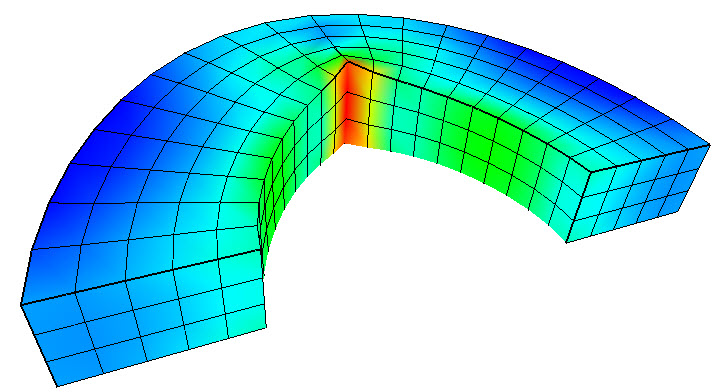 Development of DBMS and databases of physical and mechanical properties of constructional materials is other direction of information technologies use. At present, created and hosted “Database of Steel and Alloys» (www.splav-kharkov.com) for free access to web-portal has more than 1,500 grades of materials. On the pages of “Database of Steel and Alloys” engineers and scientists have an opportunity to learn about the chemical composition of the material, mechanical, thermal, physical and technological properties of materials and use them in their calculation practice.